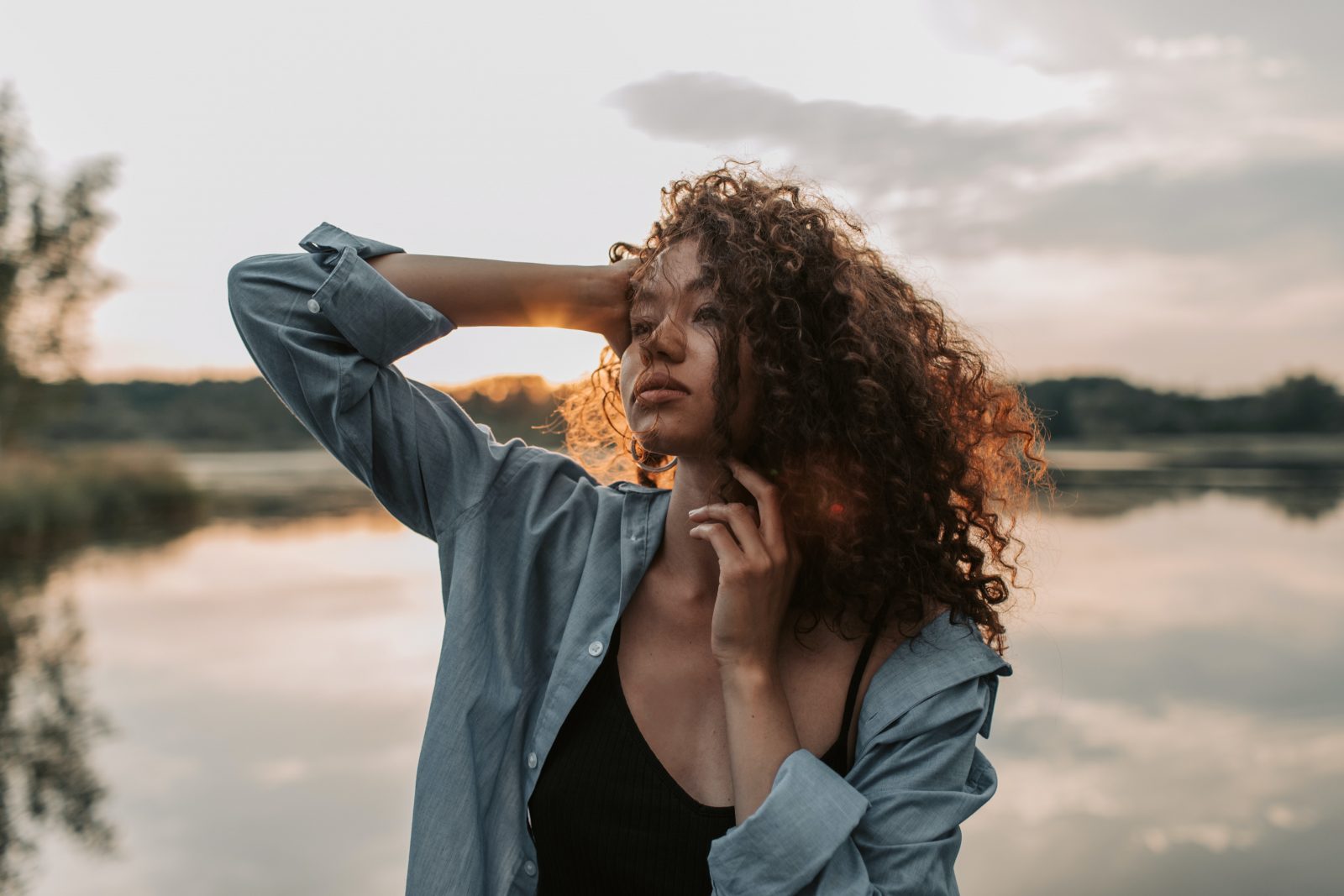 How To Recreate Yourself

So another one in the ghosting series. We’ve looked at how to deal with ghosting, how to respond to a ghoster, but now – I want us to explore how to gain closure after being ghosted. Because that’s the thing with ghosting – it comes seemingly out of the blue and leaves you with so many unanswered questions. It hurts. It makes you question yourself. And can certainly be difficult to get your head around.

So What Do You Do?

Well, you’ve sent your last response, you’ve blocked them, they’re out of your life now. Great, wonderful, absolutely MARVELLOUS. Only it’s not, is it? Because you’ve been knocked. Knocked one too many times perhaps?

This may be the cumulation of lots of crappy dating experiences, yet another time of being ghosted (to the point where you’re starting to wonder if you have a goddam sign on your head that says, “walk in, walk out, at your convenience!”)

Or maybe this experience in particular is one that’s difficult to gain closure over because you allowed yourself to get close to them – had build a strong connection, and now, just like that, they’re gone.

It’s tough. I get it. And I want you to know that all of your feelings, all of these emotions – they’re perfectly valid. Don’t discount them, don’t downplay it. You might find yourself thinking things like…

“Why am I so upset over this? I’m being ridiculous. It really shouldn’t be this much of a big deal…”

But it’s not just the act of ghosting that may have gotten to you.

Your Mind Is a Complex Thing…

Your mind is far more complex than you may think. This may have triggered something – your abandonment issues perhaps.

This may have compiled on other crappy experiences like we mentioned above. Or you may be feeling it so deep because it’s started to question your sense of self-worth.

Whatever it is, however you feel, and whether you fully understand why you feel the way you feel to this degree or not, I want you to know that it’s okay, it’s valid, it’s normal.

Who says what way you should think or feel? Who says what is or isn’t normal? YOU. Forget anyone else. Forget how society appears. What matters is YOUR guidelines, and your guidelines should say….

All emotions are valid. They’re a natural response. Allow yourself to feel the way you feel. Then decide what you’re going to do with it…

How To Gain Closure After Being Ghosted

If you want to gain closure after being ghosted, it can actually be simpler than you think.

First off, like mentioned above – I want you to feel your emotions. Really feel them. If you try to brush this off at nothing, you’re hiding away from it. And that’s only going to make all these negative feelings come back up – only stronger next time, or when they don’t need to. So here – have a read of this post on how to properly feel your emotions. That’s the first step.

– How To Properly Feel Your Emotions –

But you can’t. And that’s a key part of gaining closure, around anything actually. You have to understand and accept that, whether you like it or not, this is the way it is. This is how things have panned out. It sucks, it’s disappointing, but it is what it is.

And I know it’s difficult when things are out of your control. But with any relationship, you will never have full control. It’s 50/50, a two way thing. So sometimes, it doesn’t matter what you do – the outcome is inevitable, because it’s that other 50% that’s letting you down.

Let Me Promise You Something…

I know for SURE now, hand on heart, with all my might – you’ll look back on this, and be thankful. That person who ghosted you, they wasn’t right for you. And I know that with everything that I’ve got. Why?

Because that’s not how you treat someone that you value and respect. It’s not right. And so they’re not right. You deserve better than this, and you will get far better than this… But only when you stop holding on to what happened.

STEP 3: Decide What To Do Next

You have two options right? Stay stuck, or move forward. So once you’ve felt your emotions, you’ve recognised how you feel instead of discounting it – then it’s time to decide what you’re going to do about it.

See, I’m a big believer in the power of decision. What if you were to decide right now, “you know what, I’m done with this now.” And that’s not because you’re downplaying your emotions; denying your emotions even. Nope. That’s not the case at all.

Instead, it’s more that this low-life, this low-life who ghosted you, who didn’t even have the decency to give you a goddam explanation, who pushed you aside like you were nothing, this lowlife is not worth it.

They don’t deserve to have this power and influence over you and how you feel. Take the power back.

What happened was out of your control, but what happens now – that’s not. And you might think, “Well, that’s all well and good. I love this fighter attitude. But I’ve got no fight left in me. This isn’t the first time it’s happened…”

No, maybe it’s not. And maybe it won’t be the last time. I feel you, I really do. I know exactly how hard it is. And there will be times where you feel like you can’t pick yourself up – but you can and you will.

Create Your Own Closure

Stuff the ghoster. Seriously. When it comes to how to gain closure after being ghosted, what if you don’t NEED closure? What if they’re not even worth CLOSURE? What if you can create your own closure by simply deciding you’re done with it.

It’s like chucking out the trash right? You dump your dirties in the bin then mull over it, do you? Wonder if that mouldy onion was really “off” or whether you could have pulled back those layers and revealed some goodness.

No. You’re up, it’s out, and that’s that. And yes… yes I am saying that the person who ghosted you is trash. Actually, they are in many ways. Because you don’t treat people the way that they treated you. You don’t treat anyone in that way. It’s just basic moral values.

Channel Your Emotions Into Your Strength

The fact that you FELT something as a result of this happening – that’s a good thing. First, it shows you’re human – you have emotion and the ability to feel… Which is more we can say for the ghoster with their supposed lack of care.

What To Do If He’s Not Over His Ex

But also because you can channel it. Your emotion can become your strength. You can turn the emotion into drive, into action.

Remember how you feel right now. How the person who has ghosted you has made you feel. Remember your worth. Know that this isn’t okay. And use THAT as you fight to get you over this need for closure.

But What About The Unanswered Questions?

What about them? It doesn’t matter. This person ghosted you because of them – not you. The fact you were ghosted is no reflection on you at all. Even if you didn’t things that you’re worried about, made mistakes even – there is no justification for ghosting someone, no excuse.

So whatever happened, even if there’s things that you’re beating yourself up about, you’re thinking are the reasons that you’re responsible – know that you’re not. It’s on them. It’s been on them the second they decided to take the cowards way out.

And that doesn’t mean that you have to forget about the way you behaved. You can still accept your mistakes and work on your “flaws” – but know that when it came to the final ghosting part of the relationship, the end outcome, that’s not your fault.

It’s entirely on them, is down to their issues, or their poor behaviour. And when you know that – you know you don’t need answers. You don’t need them because they’re not important.

You got ghosted because you dated someone who was weak. That’s all you need to know. You don’t need to understand why or how they could even do this, how they feel now. No, no, no. Get it out your head. It’s their problem. Not yours. Take your power back and decide to let it go.

Moving On After Being Ghosted

If you’re really struggling, and you feel like you just can’t gain closure after being ghosted, in those moments of sadness I want you to:

And then decide. Decide that it’s not worthy of anymore thought or time.

Why Does It Hurt So Much?

Like I mentioned above, it’s probably not the person or what they did which is bothering you so much in this situation – but what it’s triggered. There’s likely to be deeper issues or insecurities that are bubbling below. That’s why the ghosting hurt so much.

So if you’re still finding it hard to let go and move on after being ghosted, if you can’t make sense of it and don’t know what else you can try – then work through it with a therapist or a coach. Take action. Don’t sit with it. Get help. That shows strength, not weakness.

This can be the turning point now. The turning point in changing how you feel and how you respond… So that it doesn’t matter how many blows you get when dating or in relationships, ultimately, you have control.

Take care. Look after yourself. And know that you are so very loved.

How You React To Your Fear of Abandonment: Recognising When You’ve Been Triggered

How To Recreate Yourself

How To Respond To Ghosting

Ghosting: How To Deal With Being Ghosted